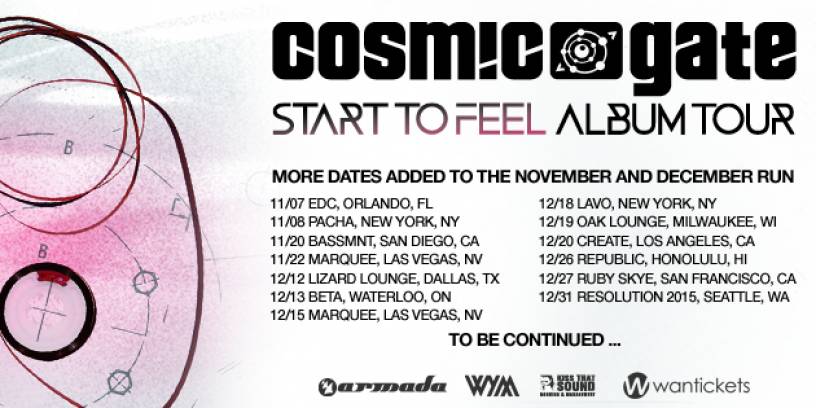 This summer saw Cosmic Gate take to the road, aboard the “Start To Feel” bus for their biggest-to-date tour of the United States. Crisscrossing the country, the Feeling wholeheartedly got Started in 13 metropolises, coast-to-coast. As the old saying goes, “Start as you mean to go on” and throughout November & December that’s exactly what Cosmic Gate will do, as Nic & Bossi are delighted to announce the 2nd stage of the Start To Feel US tour!

From New York to LA, from Ruby Skye to their grandstand blow-out on New Year’s Eve (event to be announced soon!) and multiple spots in between, Cosmic Gate will round out this new album year with another series of thrilling, never-to-be-forgotten “Start To Feel” shows!

If you missed the first leg, here’s your second chance. If you caught it first time, well you’ll likely be ready for more hands-to-the-sky “Start To Feel” action! Either way… once can never be enough! So be fast and get your tickets here!