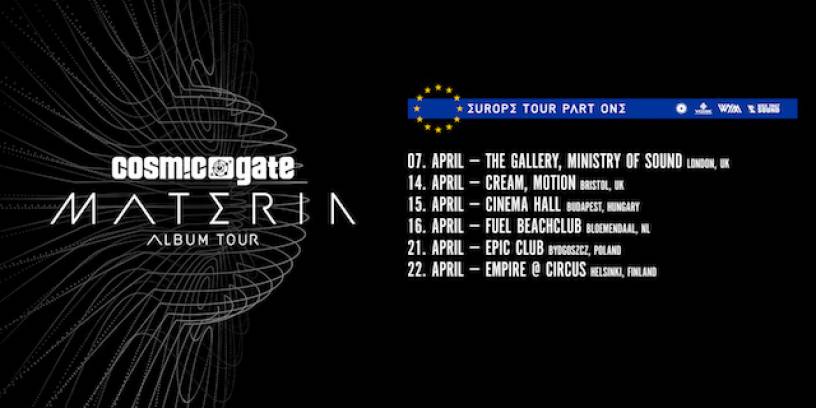 After 3 months Materia Album Tour in North America, we are now looking forward to hit Europe in April!

East coast to West (and pretty much every electronic-music-speaking metropolis between!), Cosmic Gate have spent the late winter months packing dancefloors across the States. Delivering their purest music essence through ‘Materia’, the album’s 22-date North American tour has wowed Cosmonauts coast-to-coast, drawing rave reviews along the way.

Now, playing their part in 2017’s trance spring, it’s another continent’s chance to get that bit closer to ‘Materia’s sonic magic.

Into April, Nic & Bossi switch their focus to Europe, today dropping word of their first tranche of NSEW dates across the continent.

Gearing up on April 7th at the Ministry of Sound, Nic & Bossi bring all ‘Materia’s musical verve and eye-socking visuals to London town. From there, Phase #1 hops over Eire, before heading way out west to Bristol. Eastern European hotspot shows like Hungary and Poland follow, while central and northern regions like The Netherlands and Finland are locked to rock later in the month.

If you’re within striking distance of these spaces, this is a opportunity you don’t wanna miss! So break out those clubbing calendars, dial up your clubbing Fam and start planning. Whetting the appetite that much more, you can get a peak at what’s in store, via ‘Materia’s Europa trailer.