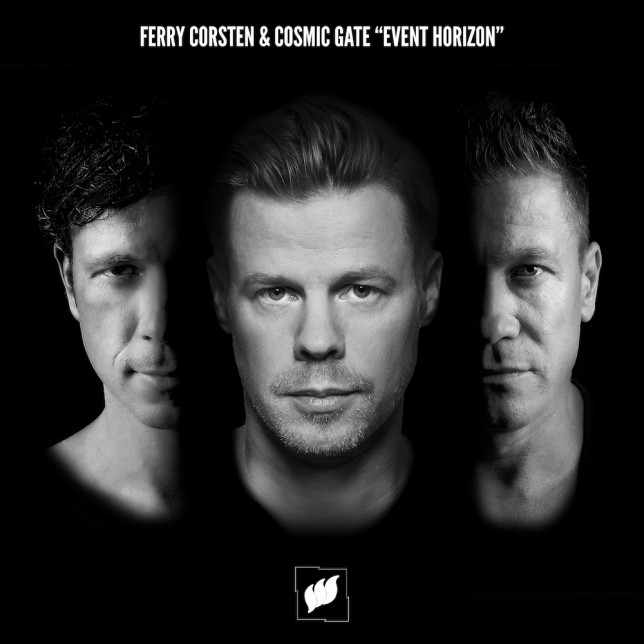 Ferry Corsten is back with another future classic, this time in tandem with Cosmic Gate. “Event Horizon” is the first collaboration between Ferry Corsten and Cosmic Gate ­ a highly anticipated group effort following years of remixing each other’s work.

The single will later be accompanied by the release of the official music video on October 10th ­ a remarkable live art display timelapse from famed interpretive painter Norton Williams, who’s collaborated with events from the 2002 Winter Olympics to Coachella Music Festival.

"I’ve been friends with the Cosmic Gate guys for such a long time. Their music is inspiring and matches up really well with what I do, so it was a no­brainer that we’d get into the studio together. I’m really excited by this song and can’t wait to see all the fan reactions when I play it live.” ­ Ferry Corsten

“After numerous events we have played together, so many years of fun and good conversations in backstage areas around the globe, we can’t believe it took us so long to get into the studio together! Ferry and his music rule the scene for two decades now,and fortunately our good personal vibes did not stop on the creative side as well, it went just boom!

Event Horizon brings together Ferry’s and our Signature Sounds in a perfect way, we are proud of the result and have more plans and first beats for a future collaboration in the drawer already! ­ Cosmic Gate

ABOUT FERRY CORSTEN
Ferry Corsten is a proven trailblazer in his world, one of the few acts who has continuously raised the bar in trance production. Continuing his stride with his newest single, “Event Horizon” builds on a 2016 that’s seen Ferry Corsten release tracks such as “Anahera” and “Neba” to great fanfare all while displaying his exclusive Gouryella show.

The remainder of the year is set to unveil some of his most memorable performances to date, as he takes part of FSOE 450’s celebration at the historic Karnak Temple in Luxor, Egypt, as well as headlines Flashover Recording’s joint venture with Luminosty Events at Amsterdam Dance Event.

ABOUT COSMIC GATE
From Cosmic Gate’s very first drumbeat through to ‘Start to Feel’ ­ their new convention­challenging long­player ­ they’ve proved to be the perfect alliance of musical minds. A by­chance meeting in a Cologne recording studio in the late­nineties set Nic Chagall and Bossi on the course to becoming Germany’s most successful and enduring electronic music duo. Their original productions have thrust them to the highest reaches of download charts & streaming lists, whilst their remixography has included everyone from scene legends like Armin van Buuren to revered Hollywood composers like James ‘Avatar’ Horner. Nic & Bossi’s behind­decks­brotherhood has now created floor­frission at an uncountable number of countries. They’ve sold out arenas, conquered electronic music capitals, spun at a litany of major festivals and 10 years into their career became the highest climbers on DJ Mag’s Top 100 chart. Driven by their critically applauded albums, club­busting singles (incl. ‘Not Enough Time’,

‘Body of Conflict’, The Theme, So Get Up and ‘Falling Back’) and scene­ defining classics ‘Be Your Sound’, ‘Fire Wire’ and ‘Exploration of Space’, their place in electronic music’s hall of fame has long since been locked.